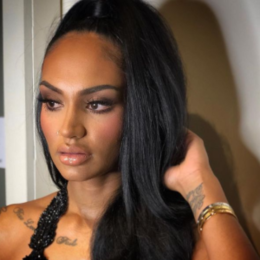 Regina Perera is an American registered dental hygienist (RHD) and model. Perera is widely popular as the wife of popular American rapper and songwriter, Juicy J.

Model Regina Perera is a blissfully married woman who has been married to American rapper, songwriter and records producer, Juicy J. They tied the knot in July 2016 in Las Vegas in an impromptu ceremony after dating several years. The artist proposed his lady love with a sparkling round-cut diamond ring. 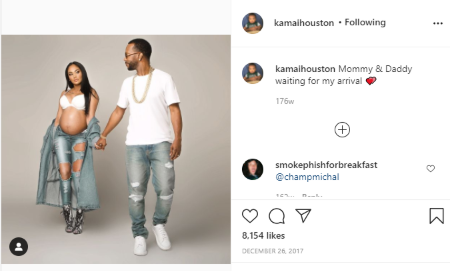 Besides, Perera and Juicy are blessed with a daughter Kamai Houston and a son named Myles Houston. On February 2, 2018, the lovebirds gave birth to their first child and made the news public via Twitter and Instagram. On Instagram, Regina showed off the baby girl and said, "Baby girl what a blessing you are kamaihouston." 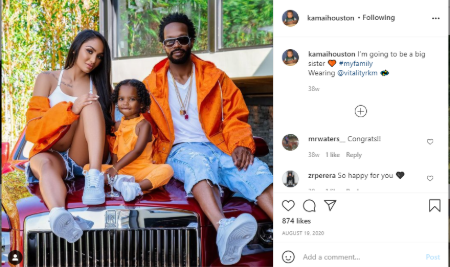 Regina Perera is pregnant with the second child. SOURCE: Instagram

A couple of months later, the pair announced that they would reveal the name of their child in a beautiful maternity photoshoot. Similarly, on August 20, 2020, Perera showed off a baby bump to hint she's expecting a second child with her husband. And, Kamai also seemed happy that she's going to be a big sister.

And, in September 2020, the couple's son Myles was born. Regina has been over the moon with the growth of her family and the birth of their son.

Regina Perera possesses a staggering net worth of $2 million. She generated big bucks from her own online boutique VitalityRKM. Her alternate source of income includes modeling for clothing brands like Fashion Nova, Goyard, Rolex, and Calvin Klein. 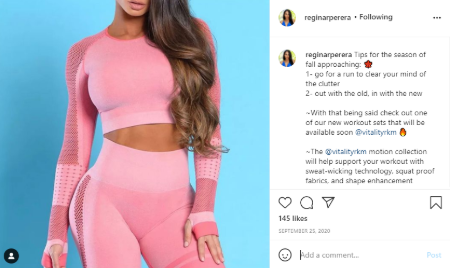 Speaking of Perera's husband Juicy J.'s wealth, he has summoned a whopping net worth of $20 million from his solo music career. Unlike most musicians of the group, Juicy launched his solo career in the early 2000s.

The rapper achieved massive success with his debut studio album "Chronicles of the Juice Man," released in 2002. Between 2009 and 2011, Juicy was highly focused on his musical career.

Thanks to his third solo effort, "Stay Trippy," released in 2013 under Columbia Records that spawned hit singles, including Show Out, Bounce It, and the platinum-hit Bandz A Make Her Dance ft Lil Wayne and 2 Chains.

Regina Perera married her longtime boyfriend Juicy J in July 2016 in an impromptu ceremony. The pair have been together for five years now.

Juicy J. and Regina Perera welcomed their first child Kamai Houston on 2 February 2018. She is soon going to be a big sister.

Myles Houston is currently the youngest son of rapper Juicy J and his wife Regina Perera whom they welcome in 2020.