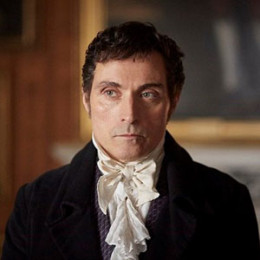 Rufus Frederik Sewell is an English actor, famous for playing antagonist roles in the movies including popular movies such as A Knight’s Tale, The Legend of Zorro, Bless the child, Helen of Troy. Rufus is also best known for his work in costume dramas and was nominated for Best Actor at The Evening Standard Awards, The Critics’ Circle Awards and the Olivier Awards for his critical and commercial success movies like Kebbeth Branagh's Hamlet on playing Fortinbras.

Sewell was born on 29th October 1967, Twickenham, England, to William, an Australian animator, and Jo Sewell, a Welsh artist. He attended Orleans Park school, a state comprehensive school in Twickenham.

In 1984, he joined West Thames College. Later, he enrolled at the Central School of Speech and Drama in London. He portrayed in Hotspur in Hennry4,  Fortinbras in Hamlet and the title role in Macbeth.

Sewell made his acting debut from the movie Twenty-One in the year 1991. Before he made his debut on the big screen, he was cast in drama play when he was at the Central School of Speech and Drama. Judi Dench was the one to motivate him to start his career in acting.

In 1993 he was cast as the nasty Tim in Michael Winner’s film Dirty Weekend. He starred in the BBC serial George Eliot’s Middle March. In the year 1996, he appeared in Kenneth Branagh’s rendition of Hamlet, Dark City, A knight’s Tale and many other movies. He was seen as an Italian detective in the BBC’S Television series Jen (2011)and appeared in the mini-series called  The Pillars of the Earth.

Rufus portrayed the role of Septimus Hodge in Tom Stoppard's Arcadia and the role of Jan in Stoppard’s Rock n roll which earned him an Olivier Award and Tony Award nomination.

Sewell received critical praise for his portrayal of Merry Monarch Charles in the BBC CharlesII: The power and the Passion. American swashbuckler movie, The Legend of Zorro directed by Martin Campbell. The same year, he was nominated for BAFTA Television Awards 2008 for Best Actor in the umbrella title for the series Shakespeare-Told.

Moreover, he has played a cameo appearance in the movie The Tourist which starred Angelina Jolie, Johnny Depp, and Paul Bettany. He was last seen in the film Gods of Egypt and TV series Victoria in the year 2016.

Sewell has also been married twice till date. He first wife was an Australian Fashion Journalist Yasmin Abdallah in the year 1999. The couple divorced a few months after their marriage.

Rufus dated Amy Gardner, a scriptwriter, and a producer. In the year 2004, he married her after dating for a few years. They are parents of two beautiful children, a son, William Douglas Sewell. Unfortunately, the couple divorced in early 2006.

Also, he has a daughter, Lola with his girlfriend Ami Komai. He is fond of visiting different places, going to cafes, and taking photographs.

As of 2019, Rufus' net worth is estimated to be $5 million which he earned from his career in acting, endorsing brands.

Rufus Sewell was first married to an Australian fashion Journalist Yasmin Abdallah in the year 1999.The couple separated a few months later.

Amy Gardner is a scriptwriter and a producer. They dated for a few years before they tied the knot. Their marriage resulted in a birth of a son and a daughter. They remained husband and wife till 2006 after that they divorced.