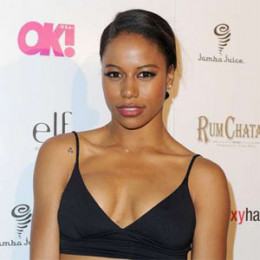 Taylour Paige, American dancer, and actress is widely known for her role in the VH1’s series, Hit the Floor. Paige started her career from dancing prior to acting. She made her Hollywood debut from the musical film, High School Musical 3: Senior Year which collected an impressive amount at the box office. As of now, Paige is in a relationship with her DJ boyfriend.

Taylour Paige was born on 5th October 1990 in Santa Monica, California under the birth sign Libra. Paige is American as per nationality, and as far as her ethnicity is concerned, she is African-American. Her parents raised her with her sibling, Travis Paige in Inglewood neighborhood of LA.

In 2008 she graduated from St. Bernard Catholic High School in Olaya del Rey. Later, she graduated from Loyola Marymount University in Los Angeles, California. From the very early age of 2, she started dancing. She then trained at Katnap in Venice, Westside Ballet Academy for almost two years.

Taylour Paige in 2001 auditioned for Allen’s Pearl and featured in every musical presented troupe from that year to 2009. In the same year of 2001, she became the student of Debbie Allen, a celebrity choreographer from whom she learned much of the dancing.

While working in Allen’s Alex In Wonderland, Paige met Stan Rongo, a TV producer who assisted her to flourish her career in acting as well. She made her Hollywood debut from American musical film, High School Musical 3: Senior Year alongside Zac Efron, Vanessa Hudgens, Lucas Grabeel, and Corbin Bleu among others.

Paige then appeared in several films, TV series and music videos like- Hit the Floor, Ballers, Grey's Anatomy, and Jean of the Joneses among others. However, she is popular from 2013's American drama series, Hit the Floor.  She shared the screen with Logan Browning, McKinley Freeman, Kimberly Elise, Katherine Bailess, and Dean Cain among others in the series.

In 2014 Paige along with all the cast members of the series involved in a controversy after the murder of her fellow actress, Stephanie Mosley.

Paige is also famous for her role in the Canadian-American film, Jean of the Joneses. She worked in the film with Sherri Shepherd, Gloria Reuben, and Shailyn Pierre-Dixon among others. Also, her movie, White Boy Rick is due to release in 2018.

The 2010 Los Angeles Laker Girl, Taylour Paige is in a relationship with her DJ boyfriend, Kyle de Pinna aka neofresco. Paige announced her relationship with him by posting a picture on the occasion of Valentine’s Day in 2017 with lots of love emojis.

The pair even celebrated Paige’s birthday together and posted a picture with a caption,

‘’ Another year of life for you, my love, and I hope that this one is the best one yet! I can't believe how much we've done, and how much we've grown together over the last 3 years. I'm just happy to see you shine bb gurl. We've been making moves in silence, and I can't wait till they all see what's to come! Happy Birthday, Tay, I love u so much. Here's 27 hearts 4 U.’’

Before this relationship, Paige was dating Mark Rodriguez, a singer but the relationship did not last long.

She also worked in the commercials for Adidas earning $63k salary (an average salary of a model of Adidas). Along with this, she also featured in several advertisements for Transamerica, Best Buy and Mc Donald’s among others.

Apart from this, Paige’s 2008 musical film, High School Musical 3: Senior Year collected $252.9 million at the box office. Considering all her income sources, she might have an estimated net worth of seven-digit figure.