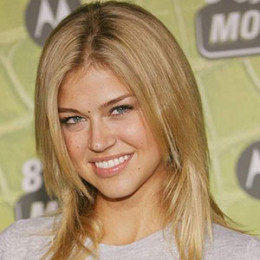 Famously known for her role in the NBC TV series, Friday Night Lights and ABC series, Agents of S.H.E.L.D, Adrianne Palicki has been nominated for Saturn Award for her role in The Orville. She's been able to carve a special position for herself in the heart of thousands.

Adrianne Palicki is married to her boyfriend, Scott Grimes since January 2019. During the San Diego Comic-Con of 2018, it was announced that she was dating her Orville co-star Scott Grimes. shared a screen on Seth MacFarlane's sci-fi comedy show THe Orville.

Palicki and her beau turned a lovey-dovey relationship into holy matrimony after dating for seven months. Furthermore, Adrianne and Scott worked alongside one another since late 2016 when they signed up for the show which released in 2017.

Palicki and her spouse were first spotted cozy together at PDA in May 2018. They attended the Comic-con party. In the same vein, Scott is a father of two kids from his marriage to Dawn Bailey with whom he split in 2007. It was the third wedding to Grimes but first to Adrianne.

Previously, she dated the stuntman, Jackson Spidell. The couple dated on the sets of John Wick in 2014 and eventually started dating. In the movie, Adrianne worked as an actress whereas, Jackson worked as a stuntman.

Moreover, in September 2014, the pair got engaged after Spidell proposed her. They were giving some serious relationship goals to the audiences but split up without marrying.

The following year, when their fans were expecting to see them as husband and wife, Adrianne surprised the audiences by calling off the engagement. But the official confirmation about their break-up was made in 2017 via an interview on FB live.

''No longer engaged. Things happen. I called off the wedding in 2015. There were some major issues in our relationship that I ignored. I realized only a couple months before the wedding that sometimes people aren't meant to be together, and it's OK to walk away.''

Before dating Jackson, Palicki was in a relationship with D.J. Cotrona in 2011 but soon they broke-up. Similarly, she also dated actor Alan Tudyk in 2009. Besides, the actress has celiac disease.

What is Adrianne Palicki's Net Worth?

Adrianne Palicki has an estimated net worth of $4 million. Her major source of income is her acting career from where she makes a good net worth and salary.

Furthermore, here are some of the list of her movies with an impressive box office collection:

According to some online sources, a TV star makes an average salary of $150k to $1 million. The actress is having a lavish life with such earning.

Adrianne Palicki started her career in acting in 2003 in the short film, Rewrite. The following year, she appeared in an episode of Smallville starring Michael Rosenbaum, Tom Welling, and Kristin Kreuk.

Similarly, in 2015, she made her movie debut as Whitney Addison in the American film, Popstar with Aaron Carter and Alana Austin.

Following her debut, Palicki worked in several movies and TV series. She, however, is famous for her role in NBC's series, Friday Night Lights. The actress worked in the show from 2006 to 2011. She shared the screen with Connie Britton, Kyle Chandler, and Taylor Kitsch.

Moreover, she is also known for her appearance in ABC's series, Agents of S.H.I.E.L.D. In 2017, she was nominated for Saturn Award for her role in The Orville.

Adrianne Palicki was born Adrianne Lee Palicki on 6th, May 1983 in Toledo Ohio. Her birth sign is Taurus. As per her nationality, she is American and as far as her ethnicity/race is concerned, she is White.

She is the daughter of Nancy Lee and Jeffrey Arthur Palicki. The starlet spent her childhood days with her elder brother, Eric, a comic book writer.

Isn't she the cutest little boy you've ever seen

Moreover, Palicki attended Whitmer High School. When she was in her high school, Palicki became the homecoming queen runner-up. From an early age, she was interested in acting so she pursued a career in acting.