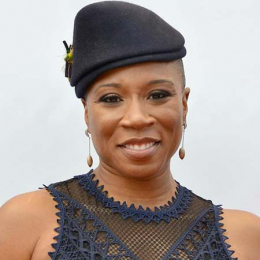 American actress, Aisha Hinds is better known for portraying the role of Harriet Tubman in the WGN America period drama series named Underground. She is also popular for working in the television series like The Shield, True Blood, Under the Dome and films like Unstoppable, Star Trek Into Darkness, If I Stay and many more. Hinds is currently working in one of the famous awaited 2019 upcoming film Godzilla: King of the Monsters.

Personal Life of Aisha Hinds; Know about her Boyfriend, Husband

Aisha Hinds is possibly single as of now. The well-known actress is currently out of any dating relationship as well as marital relationship. Moreover, she is focused on her career and is never spotted with any men outside of the reel life and events.

The Cold Case actress was previously rumored for being homosexual. In 2015's there were many celebrities who were accused of being gay and as there were no signs of Aisha's relationships, so, fans started speculating Aisha of being Lesbian.

Further, Hinds was questioned about her sexuality and many even started to discernment Aisha for her sexual orientation. However, later it was found that rumors were just baseless and she was only playing the lesbian character in the series named Under the Dome.

The look in my Ai is determination. The look on my eye is the #AladdinTouch from @rebekahaladdin

Aisha Hinds is an active person on social media and often shares posts regarding her daily life and professional life.

What is the Net Worth of Aisha Hinds; Know about her Salary, Earnings, Career

As for Aisha's film career, she debuted in the 2004 short film named Love Aquarium as Nina. After that, she appeared in many successful films like Neo Ned, Mr. Brooks, The Next Three Days, Unstoppable, Runaway Island and many more. Further, she is currently working in the upcoming 2019 film named Godzilla: King of the Monsters as Foster. Meanwhile, some of her blockbuster films are,

Take a look at the Interview of Aisha Hinds & Antony Hemmingway talking about their series Underground!