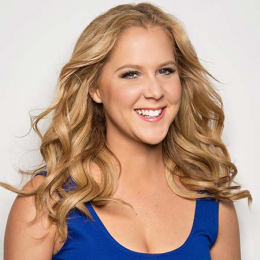 Award-winning stand-up comedian and actress Amy Schumer is best known for her hit American sketch comedy television series 'Inside Amy Schumer' and the 2015 movie 'Trainwreck.' Amy ventured into the field of comedy at the New York-based comedy club ‘Gotham Comedy Club’ in the year 2004. She even won Primetime Emmy Awards for Inside Amy Schumer as outstanding variety sketch series.

Is Amy Schumer Married? What About Her Previous Relationships?

Amy Schumer is married to chef and farmer Chris Fischer and currently living the best days of her life with her loved one. The couple secretly dated for a few months before finally going public with their relationship in February 2018. 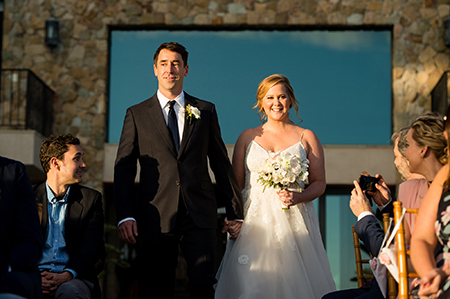 The duo shared vows in a surprise wedding ceremony in presence of A-listers like Jennifer Aniston, Jennifer Lawrence, and David Spade in Malibu a day before Valentine's Day. In fact, the pair tied the knot (on 13 February 2018) just two days after making their relationship public. Still, they sparked dating rumors back in November 2017.

Amy and Chris (who suffer from autism spectrum disorder) who announced their first pregnancy in October 2018 welcomed their first child namely Gene Attell Fischer on May 7, 2019, via cesarean section.

The 38 years old actress previously got romantically involved with numerous men. First, she got involved with Comedian Anthony Jeselnik in 2009. The couple dated for 2 years before parting their ways.

Amy then dated WWE wrestler Nicholas Theodore "Nick" Nemeth aka Dolph Ziggler shortly in 2012. Schumer dumped the American professional wrestler via text after finding out the muscle man had a very tender heart. 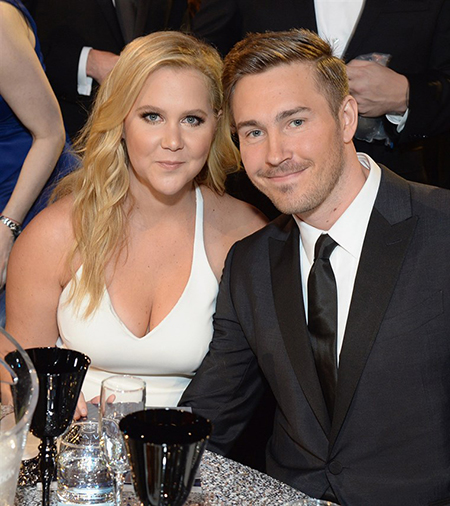 Next, the actress got into a fling with a furniture designer Ben Hanisch in 2015. They weren't afraid to show their love to the public and even was on the verge of marriage. But unfortunately, the former couple who met through dating app decided to split their ways under mutual understanding.

What is the Net Worth Of Amy Schumer? Know about her Earnings, Salary

Amy Schumer possesses a net worth of around $16 million all thanks to her career as a comedian and actress. Furthermore, she also earns a huge sum of money from her Netflix comedy special, Amy Schumer Growing.

My special #GROWING is available starting at midnight tonight! Thanks to the editors @kellylyonedit and @cplatas - assistant editor. @florianballhaus the DP @ryanecunningham for all post work. @rayangry for the incredible music @berniekaminski for line producing. @marcusraboydirector for watching my back while I was on stage. @tomlappinn for his camera work @kimmykuppkakes for hair @andrea_tiller for makeup @hatchgal for my dress. All the local Chicago crew from the camera ops to the PAs. Stage manager. @513designstudio for the set!Lighting design by Robert Peterson. Prompter. Everything ran so smooth! Catering to ushers. To the great audience and the people of Chicago. I am very proud of my work on this as the director and that my production company produced this. It was hard work and i was sick and pregnant. Thanks for believing i could do it @netflixisajoke Especially Robbie Lisa and Grig and Ted! Thanks @miacomedy and @janellejamescomedy for getting the crowd right. Thanks berk! Thanks to @mugsykane and @kimcaramele and @mofischhh for helping me every step of the way and telling me if my jokes sucked and slowly manipulating me into doing it at a gorgeous theater instead of a little club. @chicagotheatre is astounding. But more than anyone and im assuming no one is reading this anymore. But thank you to my husband, Chris who has kept me going during this pregnancy. His willingness and desire to be open with the world about himself and our marriage is courageous and beautiful. He makes me laugh more than anyone and he laughs at me more than anyone. I am more than grateful to have found such an amazing partner and best friend. I’m shocked. I didn’t think this love was out there for me. But it was and it is and I can’t wait to spend my life with you and our growing family. This special is dedicated to my friend @clubsodakenny son Doug and to our new baby who will be joining us very very soon.

Schumer also bolstered her earnings through her humorous memoir, ‘The Girl with the Lower Back Tattoo,’ which topped ‘The New York Times Best Seller’ list. Some of the movies which helped her to gather a good sum of money are enlisted below;

Apart from acting and comedy, Amy also garners earn a lucrative sum of money as a TV producer and screenwriter. She was the co-writer, creator, co-producer as well as star of series Inside Amy Schumer, for which she received a Peabody Award.

Amy Schumer was born on June 1, 1981, in Manhattan, New York, US, to father, Gordon David Schumer, and mother, Sandra Jane who owned a baby-furniture company. At the age of 9, her father went bankrupt and 3 years later her parents got divorced after her father was diagnosed with multiple sclerosis. 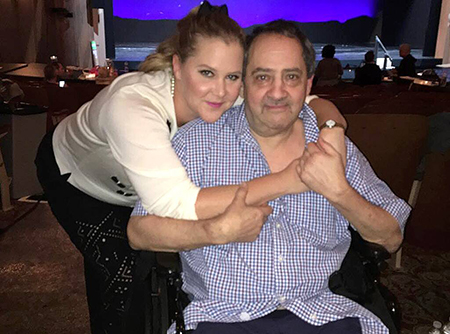 Grammy nominee Amy has 2 siblings, comedy writer and a producer, Kim Caramele, and a jazz musician and plays bass clarinet, Illinois Jason Stein. She is an American native with a birth sign of Gemini.

Amy completed her high school from South Side High School in 1999 and graduated from the William Esper Studio. She also got a B.A. in theatre at Towson University.

It was in 2015 Schumer became one of Time magazine's 100 most influential people. She also grabbed the place in Barbara Walter's 10 Most Fascinating People list for 2015.

Amy Schumer and Chris Fischer got married in February 2018 in presence of close friends like Jennifer Aniston and Jennifer Lawrence and family members. The couple even shared a son named Gene Attell Fischer.

Amy Schumer and her husband welcomed their first child, a baby boy, Gene Attell Fischer on 5th May 2019 via cesarean section.