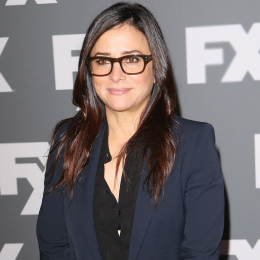 Pamela Adlon, the American actress is known for her voice acting in a number of popular TV series. She is a voice actress, screenwriter and a producer who made her Hollywood debut in 1982. She has won many awards including Primetime Emmy Award and Peabody Award.

Pamela Adlon was born Pamela Fionna Adlon on 9th July 1966 in Albany, New York. Her birth sign is Cancer. She is American as per her nationality and is of mixed ethnicity. She is the daughter of Donald ‘’Don’’ Maxwell Segall and Marina L. Segall.

Adlon's father was a Tv comedy writer-producer. He has written comic book and science fiction pulp novels. From the early age of 9, she started performing, as her father’s friend had a radio station.

Adlon's father was a native of Boston, Massachusetts born to a Jewish family. Her mother is English and follows Judaism. According to her, her parents met at the USO in Paris.

Adlon studied at Sarah Lawrence College for a semester. She shared a house with Ana Gunn after moving to Laurel Canyon, Los Angeles.

Adlon made her Hollywood debut from the 1982 movie, Grease 2 in a minor role. She shared the screen with Michelle Pfeiffer, Maxwell Caulfield, Lorna Luft, Adrian Zmed and Didi Conn.

In 1979, Adlon debuted on TV from the series, The Fact of Life. She appeared with Lisa Whelchel, Kim Fields, Nancy McKeon, Charlotte Rae, and Mindy Cohn in the series.

Apart from this, Adlon also gave her voice-over to many of the movies and series like- Kiki’s Delivery Service, FernGully: The Last Rainforest, Jungle Cubs, Rugrats, King of the Hill and WordGirl.

However, Adlon earned popularity from her work in an American comedy-drama series, Californication. She was cast alongside David Duchovny, Natascha McElhone, Evan Handler, Madeline Zima and Maggie Grace.

As of 2017, Adlon appeared in some of the movies and series like I Love You, Daddy, The Big Bang Theory, Lego Star Wars: The Freemaker Adventures and Jeff & Some Aliens. The Big Bang Theory was a popular series starring- Kaley Cuoco, Jim Parsons, John Galecki, Kunal Nayyar and Simon Helberg among others) In 2018, she is working on her upcoming movie, Bumblebee: The Movie.

Pamela Adlon, an actress is currently rumored to be in a relationship with her co-star, Louis C.K. The pair were spotted together walking for shopping. They were also spotted on the street of NYC and in The Children’s Circle 7th Annual ‘Lullabies and Luxuries.’’

Adlon might be dating together but so far has not yet revealed about their relationship. They are good friends. Louis in November 2017, was accused of sexual misconduct with several ladies like Dana Min Goodman, Julia Wolov, Rebecca Corry, and Abby Schachner.

Besides, Adlon was married to screenwriter, Felix O. Adlon (son of German director, Percy Adlon) in 1996. The couple together shared three children together named, Gideon, Odessa, and Rockie.

Living together for almost 14 years, the pair divorced in 2010 for some unknown reasons. After the separation of the parents, Adlon raised all of her children as a single parent. She splits her time between Manhattan and Los Angeles.

Adlon's movie that collected a good amount at the box office include:

Besides these, she also appeared in several video games from where she makes a huge amount.

Pamela Adlon after working in several movies and TV series was honored with several awards like:

In 1996, Pamela Adlon was married to screenwriter, Felix O. Adlon. The couple divorced after living together for 14 years.