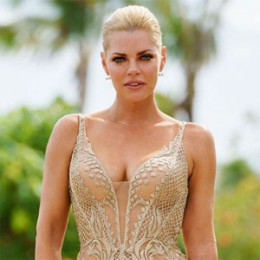 Australian actress, Sophie Monk is best known for starring the popular reality show, The Bachelorette Australia. She is a singer, songwriter, model and radio personality. She is also the member of the girl group, Bardot. Monk also worked in several hit movies like Date Movie, Click and Spring Breakdown. Monk was the winner of the fourth season of The Celebrity Apprentice Australia in 2015.

Sophie Monk was born Sophie Charlene Akland Monk on 14th December 1979 in London, England under the birth sign Sagittarius. Monk holds both British & Australian citizenships and as far as her ethnicity is concerned, she is Caucasian.

When Monk was 2-year-old, she shifted to Gold Coast, Queensland with his English father and an Australian mother. She went to Helensvale Primary School and McGregor State High School. Later, she attended Somerset College and then Paterson College.

Sophie Monk started her career in 1999. She participated in the reality TV series, PopStar, aimed to create a successful new girl group. After numbers of workshops, she was chosen as a member of the group, Bardot.

In 2002, Monk began her solo career and signed a contract with Warner Music Australia. The following year, she released her single, Inside Outside, produced by Rob Davis. Her next single, Get the Music On was ranked #10 on the ARIA Single Chart.

In 2003, Monk released her debut album, Calendar Girl. The album was ranked #35 on the ARIA Album Chart.

Sophie Monk made her Hollywood debut in 1999. She portrayed Girlfriend #1 in the movie, Monster!. Monk has appeared in several movies like- The Mystery of Natalie Wood, London, Click, Life Blood, Spring Break ’83 and The Hills Run Red among others.

Besides, Monk has also worked in many series like Entourage, Gateway, Talkin’ ‘Bout Your Generation and The Choice.

Monk made her TV debut in April 2010 from the Nine Network travel program Getaway. After her first appearance, Nine announced she would appear in the series as a recurring form.

In May 2012 she signed up for the FOX dating show The Choice a spinoff of The Voice. In the show, the celebrity judges sit with their backs turned to singles trying to score a date with a celebrity.

She also was one of the judges of the eighth season of Australia's Got Talent along with co-judges Kelly Osbourne, Eddie Perfect, and Ian 'Dicko' Dickson.

In 2015, Monk won the fourth season of The Celebrity Apprentice Australia.

In April 2017, it was announced Monk would star on The Bachelorette Australia. She picked Stu Laundry at the finale of the show that aired in October 2017.

Sophie Monk was ranked in several categories by various magazines and web portal for her amazing looks.

There were rumors about the couple's break up in late 2017. According to dailymail, The pair was reportedly planning to get married over the New Year Holiday in 2017 but didn't. They had shared a loved-up photo on Instagram, which fulled the wedding rumors.

Stu shares four children from his previous relationship. Stu and his former wife decided to co-parent their children following their separation.

Prior to Laundy, Monk dated businessman, Jimmy Esebag. The couple got engaged in January 2011. They separated a few months later after staying in a relationship for a few months due to some internal conflict.

In 2006, Monk was in a relationship with, Benji Madden, an American guitarist, songwriter, and musician. He is the backing vocalist of the popular American rock band Good Charlotte. The couple started dating in 2006, got engaged in January 2007 and separated in February 2008.

In 2010, Monk became wheelchair bound for a while after suffering a car accident. She made a shocking revelation that she had a stalker who wanted to kill her. She said, ''He thought he could hear me screaming in the corner of his hospital room and thought I wanted to die. So I wrote to him and told him I was fine.''

Sophie Monk stands at the height of 5 feet 6 inches (1.68m). She has made a huge amount of money from her successful career which has added to her net worth of $6 million.

Monk made $300,000 to front the reality show, The Bachelorette Australia. She was allegedly offered $1 million to host Nine's dating series, Love Island Australia which goes on air in 2018.

Some of Monk’s movies that have made a good collection at the box office include:

According to some online sources, an average salary of a professional model is $97,257. Monk is also a model who has appeared in several endorsements.