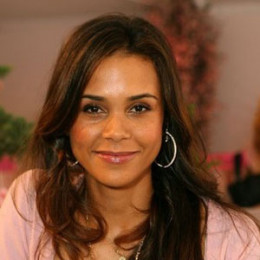 Kidada Ann Jones, better known as Kidada Jones is an American model and fashion designer. She is best known for her work as a designer and has a line called Kidadad for Disney Couture. She is the daughter of composer Quincy Jones and actress Peggy Lipton. She is also an actress. Kidada once came to the highlights for dating late rapper Tupac.

Born on 22nd March 1974 Los Angeles, California, U.S. Kidada Jones is the daughter of Quincy Jones, a composer/arranger and Peggy Lipton, an actress. She grew up along with her sibling sister, Rashida Jones, an actress, and screenwriter, in Bel-Air. She has more than one-third European ancestry and two-thirds of her ancestry is African.

There is a sacredness in tears. They are not the mark of weakness, but of power. They speak more eloquently than ten thousand tongues. They are the messengers of overwhelming grief, of deep contrition, and of unspeakable love~ Washington Irving My precious Mommy Our love existed before we did. We were a constant prayer in each other’s hearts that manifested on this material plane. Our bond knows no beginning and no end. Our souls... intertwined in an eternal dance of destiny, for I know we will meet up again and again. Although my being aches deeply for your physical presence, I pray you are enveloped in that infinite space of knowing and love. May God and every heavenly host meet you where heaven and earth touch and gently guide you on your soul journey. May you be reunited with the source we all begin from and end with. God. You are my north star, the light of my life and I will FOREVER savor the privilege and good fortune of being your daughter. I will never not miss you. I will slowly learn to live without the piece of me that left with you on May 11th. Endless love, Kidada. sending big big hearts and love to anyone who is grieving the loss of a loved one #peggylipton #truelove #mommy #grief

From childhood, she was passionate about acting and designing. She did her school education from Fairfax High School and later, she attended Fashion Institute of Designer and Merchandising in Los Angeles and dropped out at the age of 19 to work with famous designer Tommy Hilfiger.

Kidada started her career as a celebrity stylist for her father’s publication Vibe magazine. During the period, she designed different stylish dresses for the celebrities and gained attention after she styled Michael Jackson in 1995 for the cover of Vibe.

Later, Hilfiger hired her and launched an ad campaign centered on Jones and a group of her friends including Aaliyah, Tamia, Kate Hudson, Nicole Richie, and Oliver Hudson. There she worked as a creative influence of Tommy nearly for eight years.

Her fashion work includes designing clothing lines for Snoop Dogg for three years. She then appeared as a model in fashion magazines such as Vogue, Elle, Harper’s Bazaar and so on. From 2005, she started working for Walt Disney Company, where she designed for Kidada’s Disney Couture.

Apart from fashion, she also played in movies and made her debut from with The Faculty, directed by Robert Rodriguez, in 1998. The movie starred Elijah Wood, Jordana Brewster, Shawn Hatosy, Clea DuVall, Josh Hartnett and so on.

Furthermore, she has made her appearance in the movies Black & White along with Brooke Shields and also in Thicker Than Water.

Talking about Kidada’s personal life, she has dated different celebrity in her life. From 1992 to 1994, she was linked with LL Cool J, an American rapper, actor.

She then had an affair with American rapper and actor Tupac Shakur, in 1995. According to VF, the couple first met at a club and since then, they started seeing each other. Before that Kidada disliked Tupac for the nasty comments, he made about her dad.

He had said that Quincy only had intercourse with white women and his relationship led to the birth of messed up kids. It angered not only Quincy but also his two daughters. When he found out about Tupac being her daughter's boyfriend, he was totally against their relationship. But then Tupac apologized for the remarks he made which changed Quincy' mind and later the two became very close.

In 1996, the couple got engaged, but unfortunately, on 7th September 1996, Tupac was murdered. That day, Kidada and Tupac were in Los Vegas. He left Kidada in the hotel and went for the Bruce Seldon vs Mike Tyson boxing match at the MGM Grand. While returning to the hotel around 11 p.m., he was a victim of a drive-by shooting. He died at the hospital at the age of 25.

It took a while to Kidada to recover from the loss of her fiance's. In 1999,  after three years of Tupac's death, she dated Leonardo DiCaprio. However, their relationship did not long last, and the same year the couple broke up.

Then, she dated Jeffrey Nash and tied the knot with him in February 2003. After living nearly three years as husband and wife, the pair divorced in 2006. Despite the divorce, they have remained friends. After all the unsuccessful love relationships, she has decided to stay single.

Kidada has successfully collected an estimated net worth of $3 million which she earned from her career as an actress and fashion designer.

Kidada Jones married Jeffrey Nash, an American actor in 2003. Jeffrey is best known for his role in the movies Spectrum, Super Sucker, and Proud.