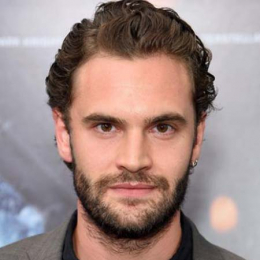 Famous English actor, Tom Bateman is best known for portraying the role of Giuliano de' Medici in the television series named Da Vinci's Demons. He is also popular for working in the films like Murder on the Orient Express. Tom is also recognized for dating the famous actress Daisy Ridley.

Tom Bateman is currently in a dating relationship with famous American actress Daisy Ridley. The duo is deeply in love and is together for over a year. Moreover, they are open about their relationship and are often spotted together in many places.

They started dating in 2016 having met on the set of Murder On The Orient Express. Although the lovebirds tried to keep things a secret, a producer made their relationship public at the premiere of the movie at London's Royal Albert Hall in November 2017.

Bateman and his love packed on PDA at the bus stop in August 2018 as they headed towards home from cinema date on public transport. They were cozying up together before indulging in a few kisses and chose public vehicle despite being famed actors.

Tom was previously dating the famous American film and stage actress Hannah Britland. The couple started dating in the year 2014, however, both Tom and Hannah preferred to keep their relationship a secret. After dating for several years the pair decided to part their ways.

Prior to his dating life with Hannah, Tom was rumored of having a romantic relationship with his co-star of Duchess of Malfi, Eve Best. It was an unusual relationship as Eve was 17 years old elder than Tom. As expected, the duo again broke up soon due to personal issues after a couple of months of dating.

Bateman is currently focused on his career and is passing his days with the love of his life Ridley. Additionally, there will be no wonder they will share the wedding vows in days to come as they share a strong bond and trust.

What is the Net Worth of Tom Bateman? Know about his Salary, Earnings

The 30-year-old actor, Tom made his career debut in the 2011 film Much Ado About Nothing as Claudio. Since then, he worked in a number of the film including Creditors, Exposure, Snatched, Murder on the Orient Express and many more. Some of his blockbuster movies are listed below:

As for Tom's career in the television industry, he debuted by working in the 2013 English-French crime drama television series named The Tunnel in 2013. After that, he worked in many hit television series including Da Vinci's Demons, Cold Feet, Vanity Fair, and Into the Dark.