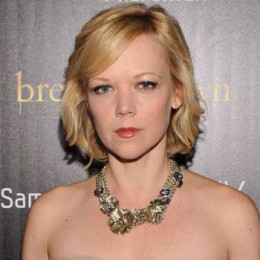 FANY Award-winning American actress, Emily Bergl is popularly known for her roles in the movies and series like- The Rage: Carrie 2, Men in Trees, Desperate Housewives, and Southland among others. Bergl is unmarried but has a child. The identity of the child’s father is still unknown.

Emily Bergl was born Anne Emily Bergl on 25th April 1975 in Milton Keynes, Buckinghamshire under the birth sign Taurus. Bergl is British as per nationality, and as far as her ethnicity is concerned, she is Caucasian. She is the only daughter of an Irish mother and an English architect father and also has a brother.

Bergl attended Glenbrook South High School and later studied at Grinnell College. In 1997, she graduated Phi Beta Kappa (older honor society for the liberal arts and science) with a Bachelor’s degree in English and Theater. She also studied at the National Theater Institue at The Eugene O’Neill Theater Center.

Emily Bergl made her Hollywood debut in 1999 from the movie, The Rage: Carrie 2 by Katt Shea. The movie is the sequel to the 1976 thriller movie, Carrie. The same year, Bergl debuted on TV from the TV series, Wasteland by Kevin Williamson.

Bergl later appeared in various movies like- Chasing Sleep Happy Champers, The Hard Easy, and Grassroots among others. She also worked in many TV series like- ER, Taken, Medium, Scandal and The Mentalist among others.

Among all her movies and series, Bergl is famous for her roles in the following:

Bergl latest work includes 2016’s TV series, American Crime by John Ridley and Gilmore Girls: A Year in the Life by Amy Sherman-Palladino. Along with acting, Bergl also performed a cabaret show titled, Kidding on the Square in Los Angeles.

In 2000 and 2003, Bergl was nominated for the Saturn Award for Best Performance by a Younger Actor/Actress for The Rage: Carrie 2 and for Best Actress in A Television Series for Taken.

Emily Bergl is unmarried but has a child. Bergl announced the birth of her first child via Twitter,

Bergl has not disclosed the name of the child’s father yet. At the age of 15, she was in a relationship with a bass player.

Emily Bergl, who started her career from the movie, The Rage: Carrie 2, has an estimated net worth of $2 million as per some online sources. However, the exact amount is not confirmed yet.

Eleanor Ruby Roisin Bergl is the only child of Emily Bergl. She announced the birth of the child via Twitter.