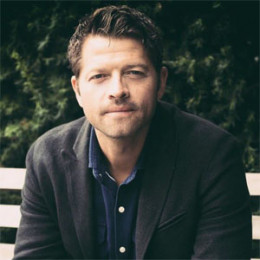 An American actor, Misha Collins debuted in the acting industry from the series, Legacy. The two times People Choice Award actor is most popularly known for his role in the CW series, Supernatural. Some of his TV credits include Seven Days, Moving Alan, CSI: Crime Scene Investigation, NCIS, Monk, Supernatural, Stonehenge Apocalypse, Timeless, and others. Being a good actor, he is also a good husband and a good father.

Misha Collins was born Dmitri Tippens Krushnic on 20th August 1974 in Boston, Massachusetts. He was raised by his parents Richard Krushnic and Rebecca Tippens in an irreligious family along with siblings Sasha Collins, Danielle Collins and Elizabeth Collins. He is an American and has German, Hungarian-Russian Jewish, English, Scottish, and Irish ancestry

He studied at Greenfield Center School and Northfield Mount Hemon School. He graduated from the University of Chicago where he studied social theory. He then joined White House during the Administration of Clinton in the Official Presidential Personnel as an intern. He also used to work as a carpenter and woodworker before pursuing his career in acting.

Misha Collins debuted in acting in 1998 after appearing on series, Legacy starring Brett Cullen, Jeremy Garnett, Sharon Leal, Grayson McCouch, Sarah Rayne and others. A year later, he moved to movies and appeared in 1999, Liberty Height in a small role along with casts Adrien Brody, Bebe Neuwirth and Joe Mantegna.

During the same year, he worked in the movie, Girl, Interrupted by James Mangold (stars- Winona Ryder, Angelina Jolie, Clea DuVall, Brittany Murphy, Elisabeth Moss and so on) and also worked on the series, Charmed with stars Shannen Doherty, Holly Marie Combs, Alyssa Milano, T.W. King, Dorian Gregory, and others).

Collins despite several movies was known best for his work on the series. His most popular TV work is 2008 Supernatural, an American series which is still going on. He appeared along with the casts members including Jensen Ackles, Jared Padalecki, Mark Sheppard, Jim Beaver, Rob Benedict, Jeffrey Deam and many more.

His role in the series won him People Choice Award twice in the category of Favourite TV Bromance and Favourite Fantasy Actor. As of 2017, he is engaged in the series, Timeless where he shares the screen with Abigail Spencer, Matt Lanter, Malcolm Barrett, Goran Visnjic, Sakina Jeffery and others.

The Buddhism supporter and follower actor, Collins is committed to Victoria Vantoch, his wife since 6th October 2011. They exchanged vows in a secret ceremony in the presence of limited guests in Maine, the United States after dating for several years.

They are parents of two children, West Anaximander Collis and Maison Marie Collins.

Misha Collins acted in many popular series and movies in his lifetime and after several years of working, he today collected a net worth of $5 million.

Besides the movie, he also published books like Baby Pants and Old Bones which is currently available in the 2008 edition of the Columbia Review.

Collins is also involved in charity work and is the co-founder of a non-profit organization, Random Acts of Kindness along with his wife. In addition, he even founded an annual week-long competitive media named, GISHWHES (Greatest International Scavenger Hunt the World Has Ever Seen) in 2011.

On October 6, 2001, Misha Collins married his longtime girlfriend, Victoria Vantoch in a private ceremony. Vantoch is a writer plus a co-founder of Random Acts of Kindness, non-profit organization.

West Anaximander Collins is the first child of Misha Collins and Victoria Vantoch, born on 23rd September 2010. He is the only son of the couple who is currently 7 years old.

Two years after the birth of the first child, Misha Collins and Victoria Vantoch again welcomed their second daughter on 25th September 2012 and named her as Maison Marie Collins. The couple even announced that they found it difficult to choose a name for the second born.