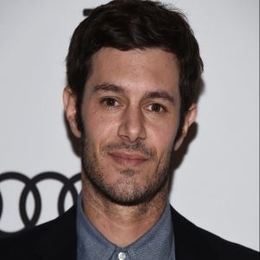 Adam Brody was once recognized as a teen idol because of his character 'Seth Cohen' in the popular teen show 'The O.C.'. Now, the actor is most recognized for his amazing acting skills and being part of many sucessful movies.

The "Scream 4" actor Adam Brody is open about some part of his personal life. However, the 39-year-old is notoriously private about his romantic life. Is the heartthrob taken or still available in the dating market?

"The O.C." famed actor Adam Brody is happily married to "Gossip Girl" alum Leighton Meester. The talented actors tied the knot on February 2014, in a private ceremony in North Carolina. 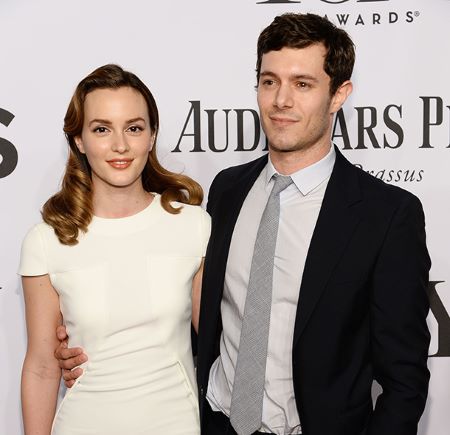 Adam, with his wife Leighton at an event. SOURCE: The Knot

The wedding was a low key affair that was attended by close friends and family. It was reported that they went for their honeymoon at Regis Punta Mita Resort, Mexico, but it is yet to be confirmed.

The star finally showed off the wedding ring in March 2014, when she attended the press conference of play, "Of Mice and Men." The ring consists of an elegant and discreet diamond design.

Well, the two hottest television actors first met in 2011 while filming the movie "The Oranges" in Westchester, New York. They were close and friendly on the set, but rumors of their dating started only in February 2013.

The actor couple finally made their relationship public in June 2013 and made their first appeared at the premiere of Brody's film "Some Girls." After dating for months, the lovebirds became engaged on 20 November 2013 and married a year later.

Adam moreover wants people to know more about his work rather than his love life, so the couple rarely appears together in the red carpet. On August 2019, They made a rare public appearance together at the premiere of his film "Ready or Not" in Los Angeles.

The Former Teen Idol is Now a Daddy.

The television icon couple kept the pregnancy and the birth of their child away from the limelight. However, TMZ obtained the birth certificate and revealed that their daughter is named Arlo Day Brody and she was born on August 4, 2015, at 12:12 a.m in Whittier Hospital, California. 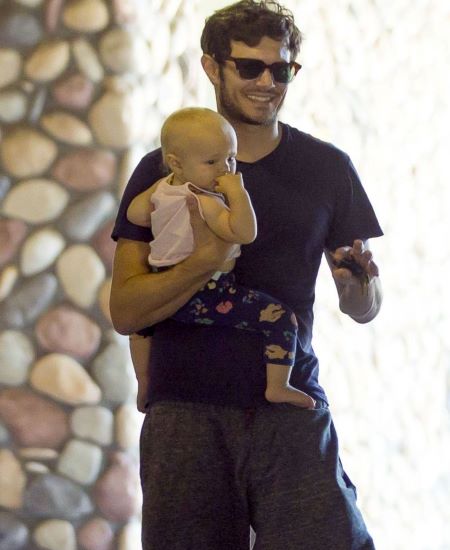 The Handsome Hunk with his Daughter.

The star parents are busy with individual schedules; however, they try to spend as much as time as possible with their four years old. The family of three likes to watch movies and go on hiking in spare time.

Adam first met his future wife while working in the movie "The Oranges." They again worked together in "Life Partners" in 2014 after marriage. Meester was asked how she feels about working with her husband. She said following in an interview with View.

"I always want to work with people that I like and love and people that I'm friends with...It's nice to mix business with pleasure."

Adam and his spouse will be seen again together in the sitcom "Single Parents." He will be playing the role of Meester's ex-husband in the show.

Adam has a Habit of Dating Co-Actors.

The "Lovelace" actor previously dated actress Rachel Bilson, his co-star from the 90's hit series "The O.C." They played the on-screen couple Seth and Summer who had a happy ending.

Sadly things did not turn out to be the same for Adam and Racheal. They dated for three years and broke up in 2006. After separating from Brody, Rachel started a relationship with actor Hayden Christensen.

The former co-stars and lover, however, recently had a reunion. They met each other at the airport on August 2019. The actress was quick to share this historic moment with their fans and posted a selfie with the caption, "Ran into my old buddy from jfk to lax #californiaherewecome." 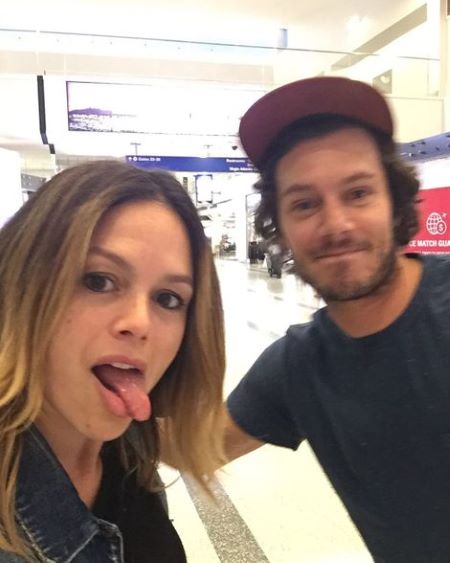 Back in 2007, he was speculating to be dating actress Laura German. Adam, in 2009-2010 started dating screenwriter and actress Lorene Scafaria. They met in the set of 2008 movie  "Jennifer's Body" and started dating. They were publicly spotted together in November 2009 and February 2010.

The actor is not absent from Social Media

As mentioned above, Brody is a private person and do not reveal much about his family life. He, however, openly shares his thoughts on social issues.

The actor expresses his views through his Twitter account, which has 12.3 thousand followers. He also uses the online platform to promote his work.

The star who is also a talented musician loves indie rock and jazz music. His favorite bands are Death Cab for Cutie, Bright Eyes, Nirvana, Pearl Jam and Arctic Monkeys.

The starlet is a big fan of Kate Winslet and Jim Carrey starrer movie "Eternal Sunshine of the Spotless Mind." Furthermore, his favorite books are Catcher in the Rye, The Amazing Adventures of Kavalier and Clay, and Less than Zero.

Adam Brody is a talented actor, writer, musician, and producer. He accumulated an impressive fortune from these professions.

Adam, in his most iconic role of Seth Cohen. SOURCE: E! Online

Earned Millions as an Actor.

The "Curfew" actor holds a net worth of $12 million. He earned this fortune primarily by being part of many sucessful movies and television series.

The San Francisco native started his career in television and played minor roles in various shows. He, however, got recognition when he played Dave Rygalski in "Gilmore Girls."

The star popularity skyrocketed when he played the nerdy Seth Cohen in the show "The O.C.."  His character was loved by fans, and he quickly garnered the teen idol status. He worked in the show for four years for 92 episodes.

With the increased popularity, Brody began getting offers from movies. He is part of many sucessful films, some of which are listed in the table below:

Adam, at present, is gaining a lot of praise for his portrayal of character Daniel Le Domas in the movie "Ready or Not." The movie which features actors Samara Weaving, Mark O'Brien and Henry Czerny is a commercial and critical success. The film earned $33 million at the box-office against the budget of $6 million.

Check out the trailer of "Ready or Not" below:

The actor is a talented musician and was part of the Los Angeles-based rock band Big Japan. The group's other members included Nathaniel Castro, Bret Harrison, and Brad Babinski.  They mostly played at pubs and festivals. The average wage for a musician in the United Staes is $17.68 per hour.

In 2010, he joined the band The Shortcoats. Their song Morning, Shipwreck is featured in the sitcom "Ben and Kate" and the film "The Meddler." The multi-talented artist is also a writer and has written a comic book Red Menace with Danny Bilson and Paul De Meo.

His Wife is a Millionaire as well

Adam's spouse of five years, Leighton Meester is an actress and singer and hold a net worth of $5 million. She is known for TV series such as "Gossip Girl," "House M.D." and "CSI: Miami." 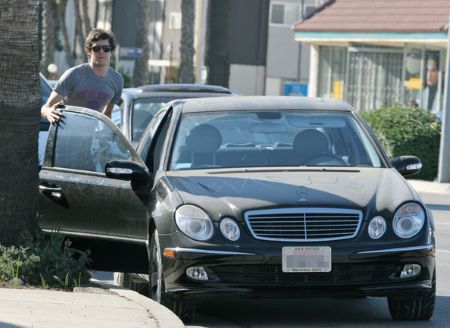 Adam Brody with his Mercedes Benz.

Adam and his wife live in a  $2.2 million house in the foothills above Hollywood. The 1916 Beaver Cleaver-style house consits of 3 bedrooms and two bathrooms. The home was previously owned by John Mayer.

The couple moreover sold a house in Hollywood, California on February 2019 for $775,000. The 1,426 sq feet apartment consist of two bedrooms and two bathrooms with a spacious combined living and dining space. 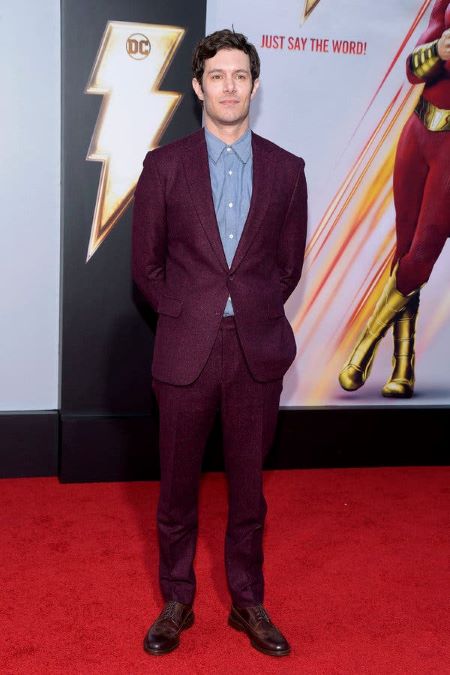 Adam Brody was at the premiere of his movie Shazam!. SOURCE: The New York Times

Leighton Meester and Adam Brody met in the set of the movie The Oranges. They dated for a while and got married.

Arlo Day Brody is the only child of celebrity couple Adam Brody and Leighton Meester. The parents keep her away from the limelight.