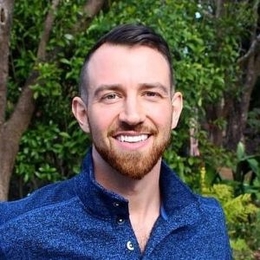 Cameron Hamilton is the Atlanta based scientist, who proved the famous saying Love is blind. Airing as a cast member in Netflix reality drama, Love is blind, he found the love of his life.

Being a scientist, it's a rare case that a person falls in love with the way Cameron Hamilton did. As well as receiving fame by appearing on reality TV. Only a few show their guts to do so and Cameron is one of the names who came up with a flabbergasting result. Learn his ongoing relationship status below,

Did Cameron Hamilton Find a Partner in Love Is Blind?

The scientist has fallen in love with Lauren Speed, who works as a producer, director, content creator model, and the founder of the Speed Brand. In the series premiered on February 13, 2020, the entire show runned for three weeks. 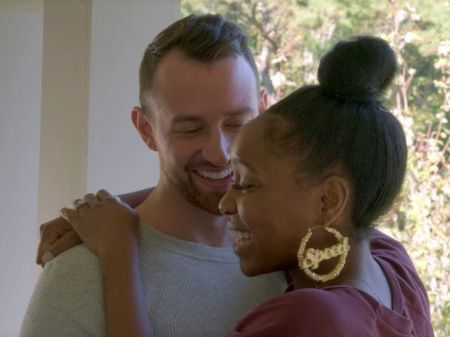 Actually, the theme of the US drama is to settle men and women in different pods, where they couldn't see each other. However, they are able to talk to each other. Following, when one proposed to another then, they are allowed to reveal themselves to their partner. Indeed, they face each other for the first time.

Following various rituals made in the show and knowing each for a while, then, finally, they are asked whether they are ready to get married or split up, answering the question, "Is love blind?"

However, in the show, many couples rejected each other. But much like love at first sight, the lovebirds Cameron and Lauran fell for each other in their first meet at the drama.

Many fans were curious about the official Love Is Blind reunion as well as eager to get information of Cameron Hamilton and Lauren Speed's relationship. As the lovey-dovey duo was favorite of many audiences since the beginning, one among two to say "I do."

As a matter of fact, they didn't disappoint the spectators. Cameron formed a strong bond with Lauren and he walked down the aisle with her in fall 2018. Cameron and Lauren might also start a family of their own within the next year.

Cameron and Lauren Joyful Statement in Being Together

The love birds; Cameron and Lauren are still together and married. And, in the run-up to the big day, the 28 years old scientist said that every day they have spent together is a blessing for him. And also he conveys that Lauren wants him to be a better person plus she has everything that he needs in a partner. 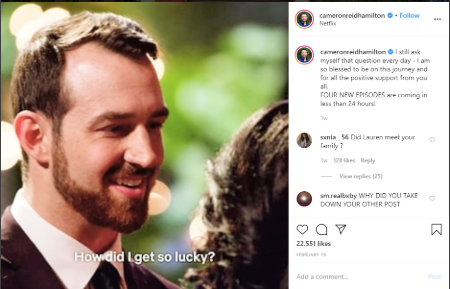 Cameron Hamilton conveys to be blessed to have Lauren Speed. SOURCE: Instagram

Even Lauren mentioned that she loves Cameron as he makes her feel comfortable being herself. As well she never had a man love her as purely and selflessly as Lauren has. Not to mention, Lauren and Cameron are even planning for another wedding, as the content creator shared the news on the Ellen DeGeneres show. 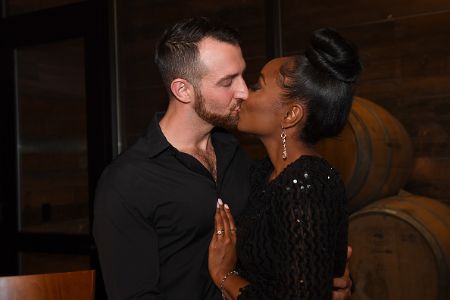 Both Cameron and Lauren are found together as they frequently post photos together on their Instagram. In fact, the set of two is seen going to theaters, events, and also made a guest appearance on Miley Cyrus's Bright Minded. Nevertheless, we wish for their bond to stay strong forever with more good things ahead.

Lauren Speed is a famous celebrity who has 629k followers on her Instagram. Lauren is the founder of the speed brand. In addition, she became more popular after appearing in Is Love Blind.