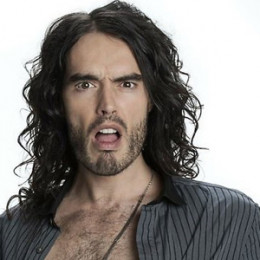 Russell Brand is a British actor, screenwriter, presenter, and comedian known for his appearances in movies like "Forgetting Sarah Marshall", "Get Him to the Greek", "Arthur", "Paradise", "Army of One", "Rock of Ages", "The Tempest" and so on. He is an activist and has spoken about cultural and political issues such as wealth inequality, corporate capitalism, addiction, media bias, and climate change. Similarly, Brand has hosted shows like "RE: Brand", "Big Brother's Big Mouth" and MTV Awards in 2008, 2009, 2012.

When he was just six months old his parents divorced and he was raised by his mother. Since his mom was often ill and during her surgery for uterine and breast cancer he had to stay with his relatives when he was 8.

At the age of 14, he suffered from bulimia nervosa which is an eating disorder. Later on, after two years he fled from his house since he didn't have good terms with his mother's partner and started using drugs like amphetamines, LSD, Ecstasy, and cannabis.

He used to meet his father once in a blue moon who took him to see prostitutes when they were on Tour in Thailand. 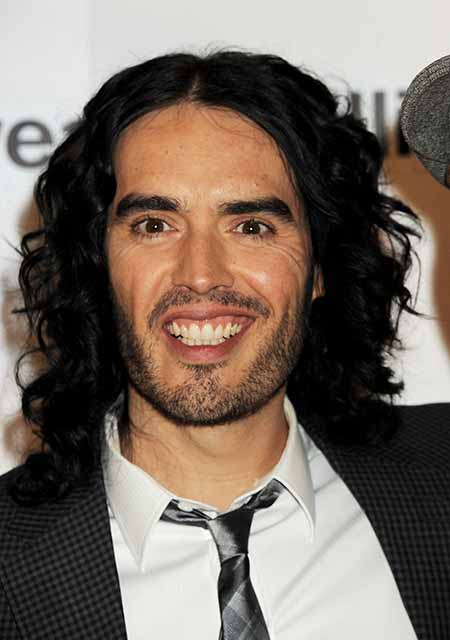 He started doing Broadway since he was 15 in his school production in 1976 musical gangster comedy called Bugsy Malone and continued acting as a film extra that time.

As for his studies, he enrolled at Grays School Media Arts College where he completed his higher studies. He was called to study at the Italia Conti Academy in 1991 where he studied for a year a was rusticated from his college due to his drug use and irregularity.

Russell Brand is professionally an actor, screenwriter, presenter, and Comedian who is present in the entertainment field since 1994. He has also done voice acting and is a radio personality as well. His career started officially after he took to stand up comedy.

Brand was into acting at an early age of 15 when he started doing Broadway shows at his school's production and later on started starring in movies.

Besides movies, he has also worked in productions and has his own company named Vanity Projects. He has another production company with his friend Nik Linnen called Branded Films.

He has worked in radio as well in early 2002 when he hosted a Sunday Afternoon show at the Xfm station which is an Indie Rock Station. Brand has hosted some on-air shows like BBC Radio 6 Music, Talksport and so on.

He has done podcasts and written an autobiography. Later on, he was signed by HarperCollins to write two books Articles of Faith and Irons in the Fire.

Brand first performed a stand-up performance in 2000 at the Hackney Empire New Act of the Year. His performance was highly appreciated. He has performed in many skits like Pablo Diablo's Cryptic Triptych and Eroticised Humor.

Further on in 2006, he launched his national tour and also performed his stand up sketch at Amnesty International's Secret Policeman's Ball the same year.

He co-hosted the event Teenager Cancer Trust in 2007 and performed for Prince Philip and Queen Elizabeth for the 2007 Royal Variety Performance. In 2013, he went on a tour to present his comedy show Messiah Complex. 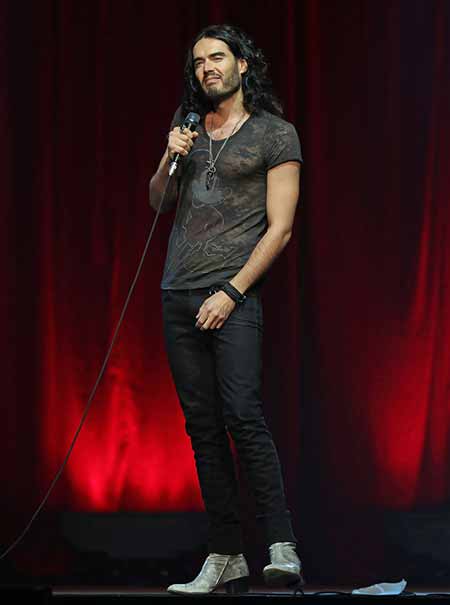 Brand had a tour scheduled on May 1, 2018, which was called Re: Birth tour which he started in April 2017. He was all set to perform stand up comedy at the Apollo in Manchester, England but had to cancel due to his mother's car accident which was a life-threatening one.

In 1994 he was cast in a Television series named The Bill and Mud where he portrayed the role of Billy Case and Shane respectively. In the British police procedural series The Bill, he appeared in an episode while in Mud he was seen in six episodes of the first season.

After his debut, he was seen in many television platforms and also hosted shows like RE: Brand, Big Brother's Big Mouth and MTV Awards in 2008, 2009, 2012.

Brand was excellent as a host as he was excellent in making people laugh and possessed an art of bringing people's attention towards him. He has filmed a documentary relating to his drug use and struggles to come out of it in 2012 and 2014 which was a BBC Three documentary.

In 2018 Brand was cast in the British Television comedy panel game called Celebrity Juice where he appeared for 19 episodes as a panelist. He was joined by Fearne Cotton, Gino D' Acampo and Kelly Brook.

Brand's movie debut happened in 2007 from the movie St Trinian's in the role of Flash Harry and later on appeared in many movies like Penelope, Forgetting Sarah Marshall, Arthur, Paradise, Army of One, Rock of Ages, The Tempest and so on. His movie Arthur was a huge hit where he acted alongside Helen Mirren, Jennifer Garner, Nick Nolte, and Greta Gerwig.

He voiced the character of Dr. Nefario in the hit animated movie Despicable Me part 1 & 2 in 2010 and 2013 respectively. Brand even voiced Creek in 2016 movie Trolls where he was joined by Justin Timberlake, Anna Kendrick, Gwen Stefani and James Corden who also voiced a particular character.

Russell Brand has an estimated net worth of $15 million which he earned from his huge career as a comedian and an actor. He has been a part of huge movies, television shows, and comedy skits which are each many sources of income.

In 2009 he bought a house along with his ex-wife Katy Perry costing $3.2 million which has a market value of $3.4 million.

After the divorce with Katy, he bought a house in Hollywood Hills, California in 2013 which estimates to be $2.2 million. From his divorce from Katy, he could have earned $22 million but he didn't take a single penny from her.

Russell Brand married Laura Gallacher in a town in England, Henley-on-Thames on August 26, 2017. They were dating since 2015 and were in an on and off relationship since 2007.

The couple is blessed with a daughter named Mabel Brand in November 2016 and is living a blissful life in their home in Shoreditch, London. There are rumors about them welcoming a second child soon.

They welcomed their second daughter in July 2018.

As per a source,

"Obviously they are over the moon, and Russell will no doubt be gushing about her whenever he next performs stand-up."

Gallacher explained about her pregnancy,

“When I was pregnant I got terrible morning sickness. All day. Not just in the morning. I wanted to engage myself with creative, domestic projects as a distraction.

"I suppose I was nesting. I started to paint everything in sight and realized I had nothing to wear but drab workman's overalls. I thought 'I should be wearing something that feels a bit more joyful'."

The couple is together for years and is free from any kinds of divorce rumors.

Prior to Gallacher, he was married to popular singer Katy Perry. 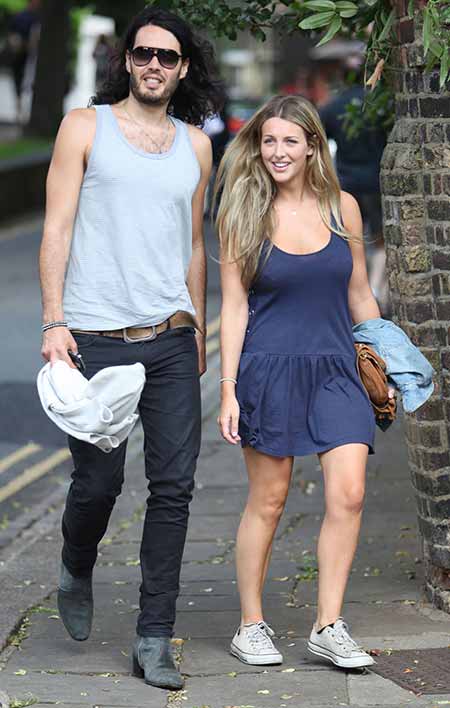 The wedding ceremony was held at the Ranthambhore tiger sanctuary in Rajasthan, India on October 23, 2010. They first met in the mid-2009 when they filmed together for a movie named Get Him To The Greek.

In 2011, he filed for divorce reason being their huge differences in thinking and lifestyle. They were deeply in love but their growing differences made it hard for them to live together.

After his separation with Katy, he dated Jemima Khan who is an editor for New Statesman for a year in 2013. Their relationship didn't last long as there were some allegations about him cheating on Khan which ended their relationship in September 2014.

He was diagnosed with bipolar disorder and attention deficit hyperactivity disorder.

Brand was interested in transcendental meditation which is a form of silent meditation and through it, he used to feel at peace which took him close to god and his divinity. He also practices Christian spirituality by reciting the Lord's Prayer.

He is one of the political activists who actively participates in different political activities. In 2009, he participated in a celebrity letter to The Independent, as a supporter of the Hoping Foundation to criticize Israel's assault on Gaza. He together with other celebrities wrote to Times Newspaper to defend the Bahai leaders who were on trial in Iran.

He was selected by the Dalai Lama to host the Buddhist leader’s 2012 youth event in Manchester considering his interest in meditation and his values towards inner peace. Moreover, he participated in the People’s Assembly against Austerity that attracted an estimated 50,000 people marching from the BBC office to Westminister.

Drug Use Recovery And Battery Charges

Russell was into drug from his teenage times and that hampered his health to a great extent. Due to his drug use, he was arrested several times. But he started living a sober life without drugs from December 13, 2002, and is focusing himself on meditation by practicing transcendental meditation.

He helped raise funds by organizing fundraiser programs and has sponsored many people to pay for their rehabilitation treatment and process.

Brand was arrested on battery charges after he hit a paparazzo who was blocking his and ex-wife Katy Perry's way. He was released from the charges by paying a $20,000 bail fees.

There was an arrest warrant filed in his name when on March 15, 2012, he threw a photographer's phone through a window who happen to be clicking pictures of him. But the mobile phone landed in a law firm's window.

At the event of GQ Awards show while receiving his award he made a speech about the Nazi regime which was found very offensive by the people and he was exiled from the show. He was told to reflect on his mistake later on.

He has a youtube channel of his own which has around 1.3 million+ subscribers. In his channel, he usually is seen talking about inspirational things and also teaches yoga. He talks about spiritually and inner peace which he found through meditation.

Brand has around 999k followers on his Instagram account as of 2019. He owns a German Shephard dog as a pet named Bear.

Katy Perry is the first wife of Russell Brand to whom he married on 23rd October 2010. She is an American singer and songwriter who is amongst the talented singer we have.

Russell is currently in a married relationship with Laura Gallacher. She is a Scottish lifestyle blogger and is the sister of television presenter Kristy Gallacher.

Born in November 2016, Mabel is the one only daughter of Russell Brand and Laura Gallacher.