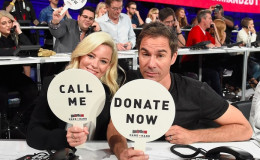 From Ellen Degeneres to Rihanna, MarriedWiki today brings you the most charitable celebrities and their inspirational stories that are helping in making this world a better place. Stay Put!

The most inspirational act is an act of kindness and what better way to express kindness by helping those in need. Hollywood celebrities who are powerful and successful know better ways to inspire us by fighting or donating for the right causes. And there are many such celebs who have given back a lot more to the people, going above and beyond to make difference.

From Ellen Degeneres to Rihanna, MarriedWiki today brings you the most charitable celebrities and their inspirational stories that are helping in making this world a better place. Stay Put!

The sensational singer, Selena Gomez who's the most followers on Instagram shares an inspirational story of her fight against a life-threatening autoimmune disease Lupus. Earlier this year, the Fetish singer had gone through a kidney transplant, donated by her beloved friend Francia Raisa. 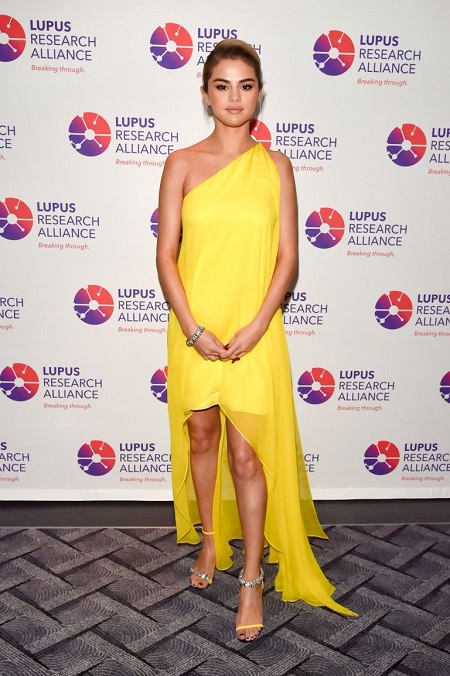 Last night, at the Lupus Research Alliance's Breaking Through Gala, the 25-year-old gorgeous singer delivered an inspirational speech about how she faced a life-or-death situation while undergoing transplant and chemotherapy.

Despite her health problems, she was seen working hard, releasing her singles. She stated that after the transplant she's feeling much better, with no arthritis problem and improved blood pressure and metabolism.

On May 22, 2017, during Ariana Grande's concert at Manchester Arena, a suicide bomber detonated a bomb that took lives of 22 people leaving 116 injured.

It took a great toll on its people and the singer but Ariana didn't hide away and flew back, instead, she was back on Manchester Sunday evening with a benefit show for 50,000 fans at Old Trafford cricket ground, which was two miles away from the crime scene. 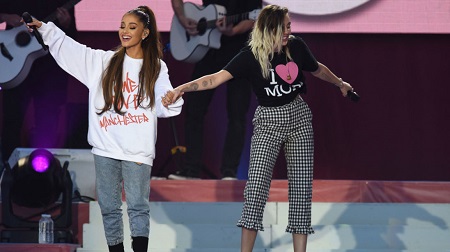 To join the big One Love Manchester Show were Katy Perry, Cold Play, Justin Bieber, Miley Cyrus and Liam Gallagher. "Let's Not be Afraid, Manchester" was the show's opening line and everyone dedicated their songs in the memory of those who lost their lives raising more than $13 millions for the Victims of attack.

The singer made this huge announcement after a concert performance at Michigan's Palace of Auburn Hills, raising the money from his world tour. 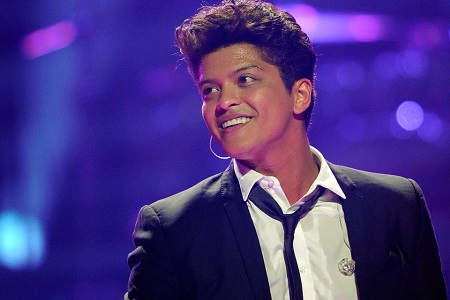 The money will assist the Community Foundation of Greater Flint to fix the water shortage that has been left unattended for the past two years due to lead-filled water. The CFGF President, CEO Isaiah M. Oliver thanked the generous singer and stated,'

"We know Bruno Mars’ $1 million gifts will be transformative to the children and families of Flint. He understands the issues faced by Flint citizens, and we are touched by his concern and generosity."

Mars stated in an MTV interview that it's our moral duty to stand together against any disaster that's harmful to our children and families.

When the deadliest hurricane Irma struck Florida on September 10, 2017, more than 6 million residents lives were in danger along with actress Kristen Bell who was there at the Dolphin Resort at Epcot Center shooting for her upcoming film, Like Father. 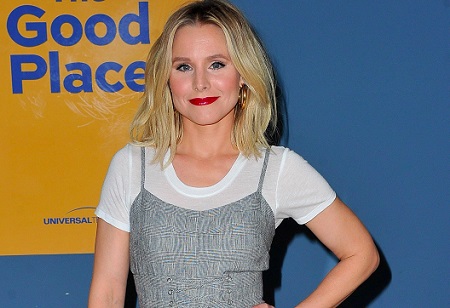 Despite being stuck herself, she approached with great spirit and attitude giving a helping hand those in needs. She also saved her Frozen co-star Josh Gad's family by evacuating them and arranging a hotel for them to stay safe.

When she found out that there were evacuees inside an Orlando Middle School which was made into a shelter, she went there and performed a concert to make the lives of the children and other families less tensed.

With a number of sexual assault and rape allegations, film mogul, Harvey Weinstein has become the most infamous celebrity of the year 2017.

But despite his fame and success, all those celebrities who worked under him or who were the admirers have stood up against the producer, making us believe that nothing stands between justice and crime. 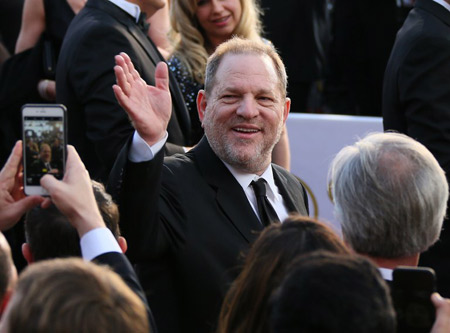 Actresses like Gwyneth Paltrow and Angelina Jolie have even shared their own horrible experiences with Weinstein while renowned officials like Hilary Clinton have also backlashed the producer calling his act "intolerable" emphasizing that "their courage and the support of others is critical in helping to stop this kind of behavior."

Harvey's good friend, actor George Clooney who has known him for 20 years also spoke against him, stating that his act is indefensible and it's pretty crazy to find such things out about him after so many years.

The pop queen of the American industry, RiRi's contribution for the children of Malawi is one of the greatest contributions given by any singer. In January 2017, RiRi went to Malawi to monitor and learn the challenges of poverty, poor education and lack of basic human rights by its people. 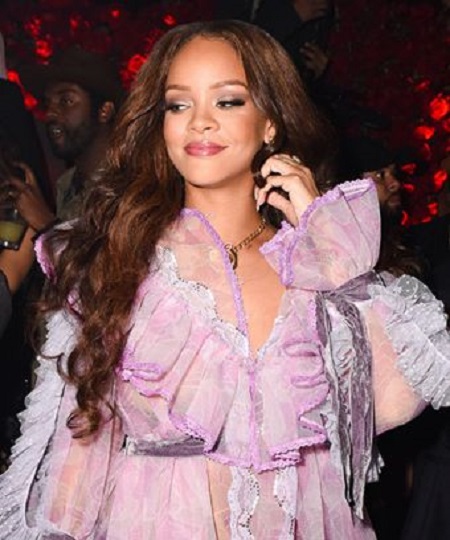 With her foundation, Clara Lionel Foundation, she carried out an extensive work to check these problems, addressing the issues to the concerned authorities and raising as many funds as possible to meet the needs of the suffered ones.

The organization, The Global Partnership for Education has set its goals to raise $3.1 billion for more than 870 million children in all the affected countries between 2018 and 2020 and RiRi with the help of this organization attempts to increase global awareness regarding this issues. For her work, she was also awarded Peter J. Gomes Humanitarian Award.

The famous talk show host Ellen Degeneres never fails to make us laugh and she's been ruling over hearts of millions with her compassionate yet cheerful nature. And with her platform, she's always encouraged us to be more kind and help those in need. 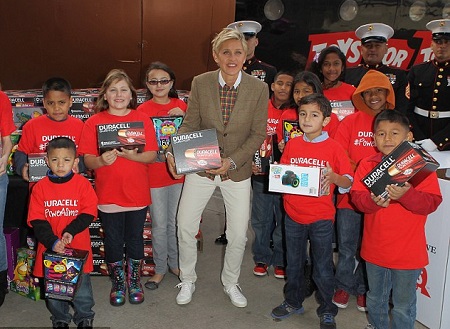 Degeneres who was honored as the People's Choice Awards Favorite Humanitarian last year has donated more than $50 million dollars on her show. She also raised more than $12 million for breast cancer relief, $10 million for families affected by disasters.

Not only this, she helped out Spain Elementary School by donating over $500 thousand to rebuild the school and also set up with Ryan Renolds and asked to step into her studio dunk tank to make $25,000 for the Make-A-Wish Foundation.

Her show's segment, Cash For Kindness where she gives money to those who offer a hand in help in a set-up condition has also given away more than $100 thousands.

It was the costliest tropical cyclone breaking record previously set by Hurricane Katrina. To aid the victims, J.J Watts started the relief fund and celebrities from all around have donated to provide relief to the victims.

Actors like Sandra Bullock contributed $ 1 million while Beyonce is working with her team BeyGooD to implement plans for the affected ones. 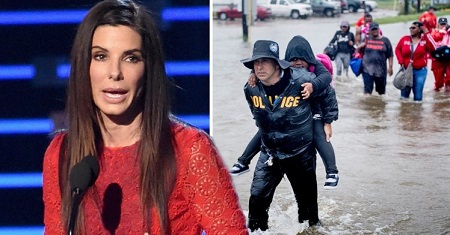 Kevin Hart also helped raise $ 1 million while Nicki Minaj donated $25,000 following the footsteps of Hart. Singer Bruno Mars and Taylor Swift also donated $1 million dollars to the fund while the Kardashian's provide 100- chef-prepared meals to the affected ones in downtown LA. The relief fund has reached $30 million and is still continuing to increase.